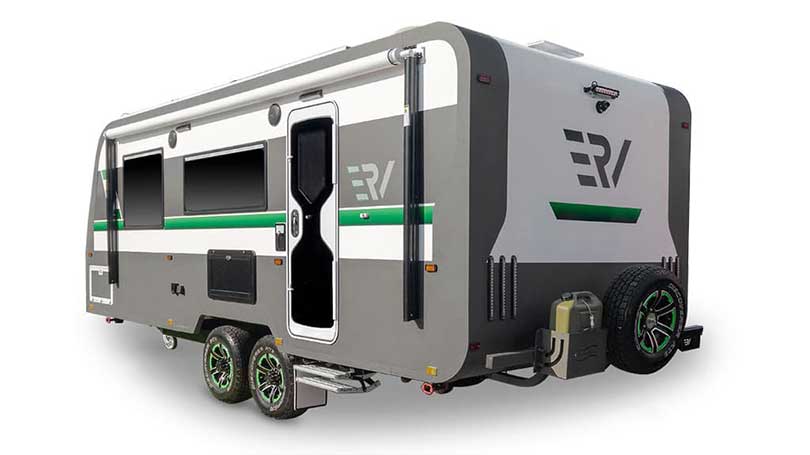 Almost unlimited, self-contained power for caravans has become a reality with Melbourne manufacturer Retreat Caravans confirming its solar-boosted ERV model is now on sale after successfully completing a plug-free 20,088km, 176-day trip across the country.

The latest development of the hi-tech ‘smart’ caravan platform unveiled earlier this year, the ERV built by 15-year-old Retreat in conjunction with Australian technology company OzXCorp, uses a lithium-ion battery ‘bank’ and extensive roof-mounted solar panels to deliver enough grunt to power a range of appliances simultaneously and for extended periods of time.

The first test caravan is a 20-foot unit that runs on a self-generated 240-Volt system using a special inverter and has no gas system. 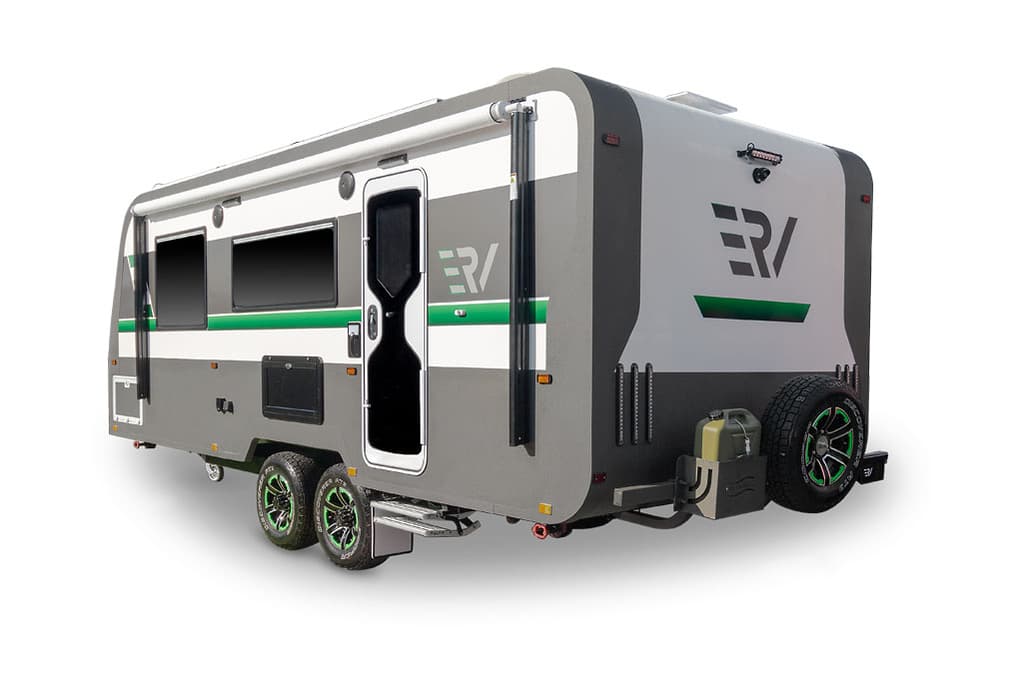 It allowed ERV test couple Fran and John Huett to travel for 20,088km over six months from their home base in Melbourne via the Nullarbor to the west coast, travelling the Gibb River Road to Darwin before returning south via Alice Springs

“This was completely ‘off-the-grid’ travelling,” said ERV national sales manager George Drak who spoke to caravanancampingsales after the latest ERV show van was displayed at the recent Perth 4WD and Adventure Show.

“For test purposes, the prototype ERV accomplished this without any charge assistance via the Anderson plug of the tow vehicle or any 240-Volt mains power. This was a class-leading six-month test, not a week-long sprint that most caravan manufacturers do. 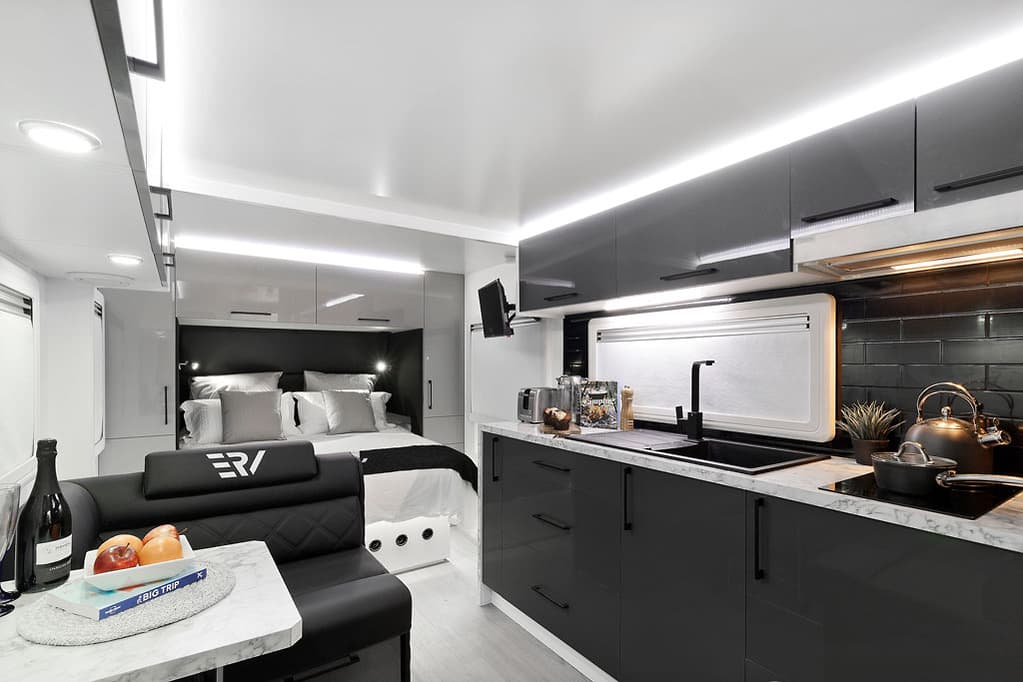 “It proves the ERV is a renewable power plant on wheels as well as a home away from home.”

He said the technology employed in the ERV is being developed not only for Retreat, with the potential to be offered to other caravan manufacturers in Australia and other markets.

“We have global interest in this caravan and the technology,” Drak said. “We know this will take off.”

On the test journey, the Huetts used the ERV to feed two other caravans with electricity, running two air conditioners and appliances and still having power spare — even when tested in the shade.

The battery is rated at 16 kW/h but is conservatively de-rated to 14.3 kW/h to ensure reliable and consistent power, while the inverter had a “huge” 5000-Watt continuous rating. 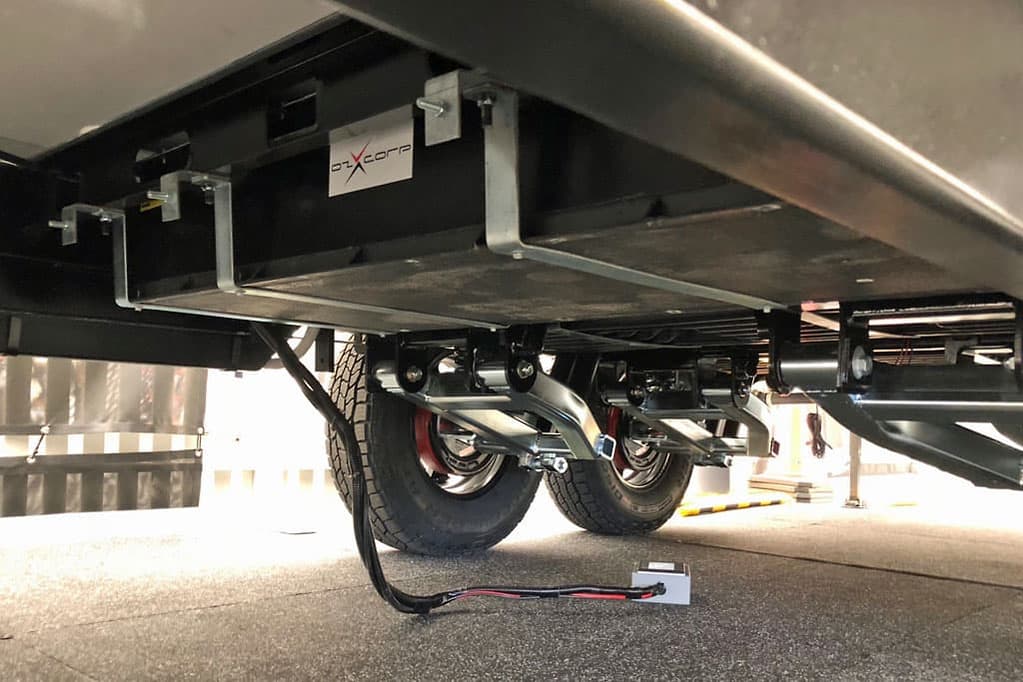 “The lights are the last function to go, but that is very unlikely to happen,” Drak said.

“If the battery is critically low, the lights and fridge will continue to draw power right to the end. This keeps the occupants safe and ensures they have food.”

Rather than lying flat on the roof, the lightweight roof panels use a patented curved mounting system to improve access to the sun’s rays and sit above the caravan roof to keep the panels cool and reduce heat flow through to the caravan roof.

They also cover most of the roof (although different panel layouts are available on production models) with space for a vent and antennas where needed. To free up roof space the air conditioner is located underneath the bed. 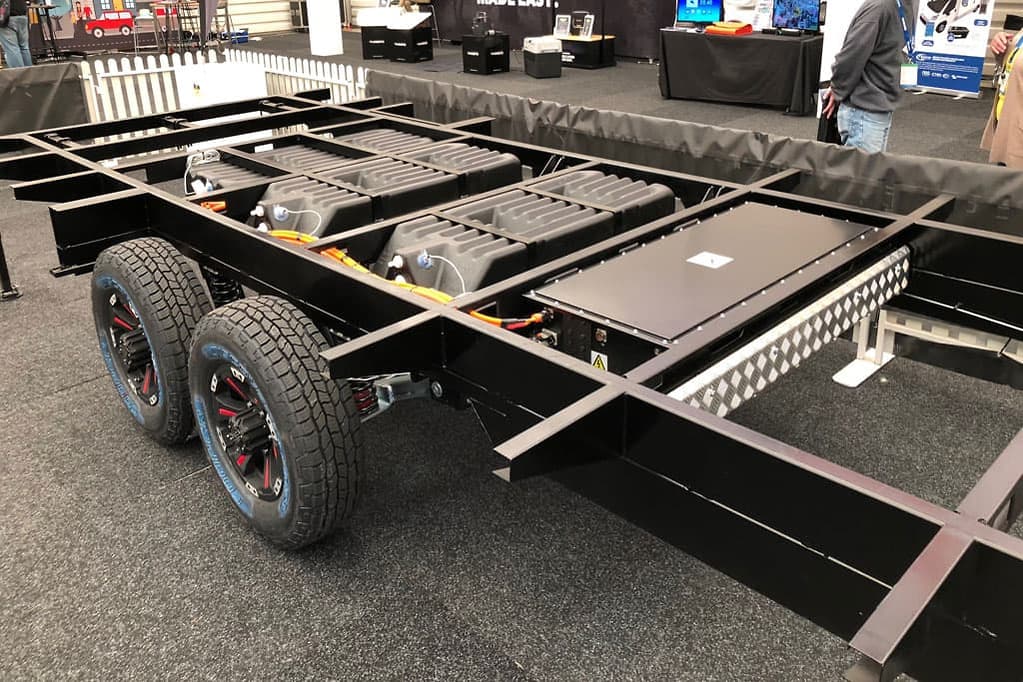 At the Perth 4WD show, ERV demonstrated a breakfast scenario with a toaster, kettle, induction cooktop, air conditioner and hairdryer operating simultaneously, drawing from the batteries.

“Onlookers had to be reminded that the lighting, TV and the full-size fridge were all running simultaneously as well,” he said.

“All this without being plugged into the grid-connected mains, a generator or any other external power source while running any combination of 240-Volt appliances up to 5000-Watts continuous.”

By not using gas as an alternative energy source, the ERV van doesn’t need to comply with gas regulations including additional vents in the caravan. 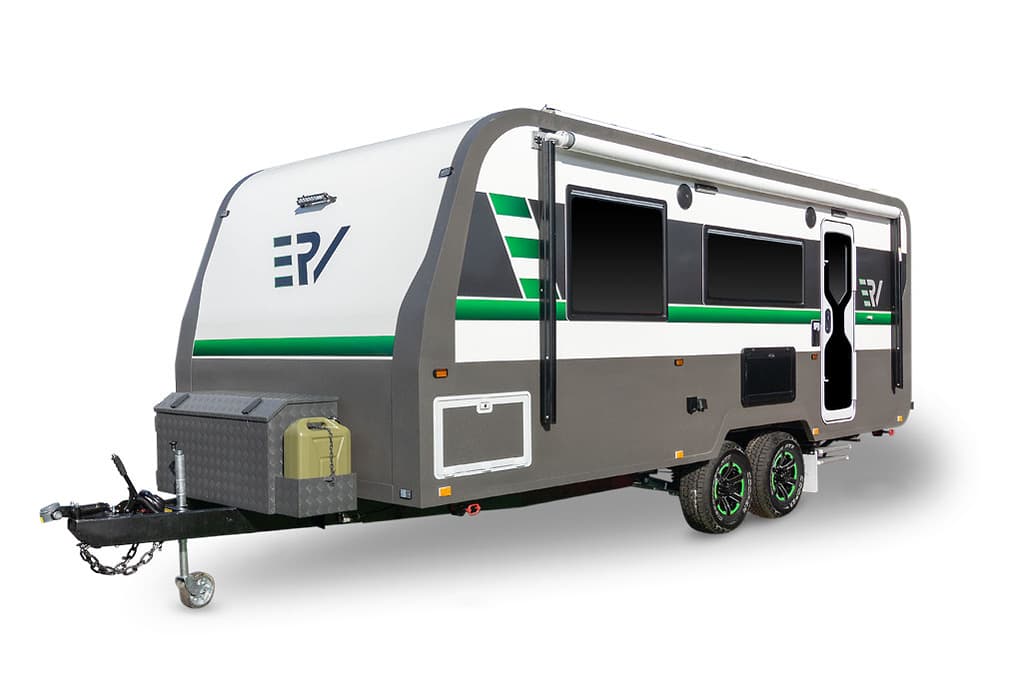 Drak said the caravan’s chassis-integrated energy system is dust proof as well as waterproof to a depth of one-metre for about 10 minutes. There’s also a 50mm ‘crush-resistant’ shell around the batteries for severe off-road conditions.

The ERV electrical system is fed by an OEM automotive-grade 14.3kWh, 48-Volt lithium-ion battery, a 5000-Watt Smart Inverter and up to 2033-Watt solar system. It runs a lithium battery about the size of a 90-litre water tank and weighing about 115kg.

The ‘wow factor’ electrical system also features a 15-Amp industrial heavy-duty socket outlet in the tunnel boot that is capable of running any three-pin, 15-Amp welder.

“Having a fully self-contained power pack gives the caravan – and the traveller – almost unlimited scope to travel off the power grid, to remote areas previously difficult to access,” he said. 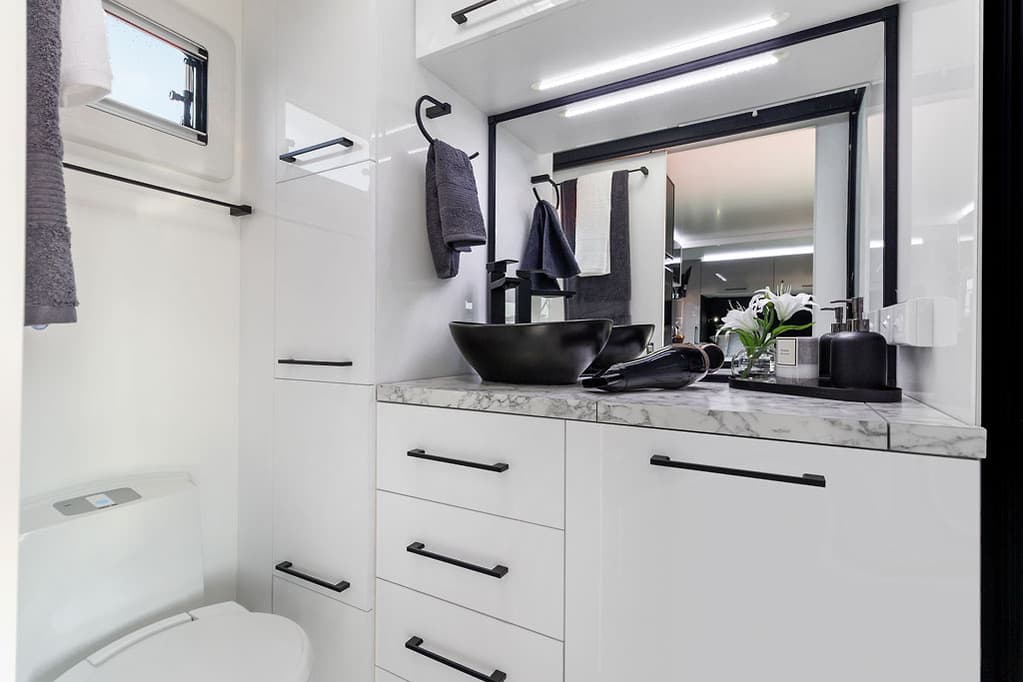 “It also brings the economical benefits of not having to choose a powered site at a caravan park, taking the non-shaded site, and even the potential of reduced fuel consumption because there’s a flush roof without an exposed air conditioner.”

The ERV uses a Retreat van as its donor, with structural changes to the chassis to allow the placement of the lithium-ion battery. It sits beneath the floor in the same placement as the van’s potable and grey water tanks.

With a Tare weight of 2700kg, the fibreglass composite bodied 20ft ERV2 model displayed in Perth featured a 150mm A-frame, DO35 coupling, 16-inch wheels with 265/16 Mickey Thompson AT tyres, 10in drum brakes and a Dexter sway control system.

Standard ERV suspension is Control Rider TS (twin shocks) but buyers can opt for Al-Ko or Simplicity coil suspension as well as airbags.

Other features on the ERV2 included electric steps, powered awning, and a slide-out for a Weber BBQ, along with a Fusion sound system and optional outdoor TV unit. 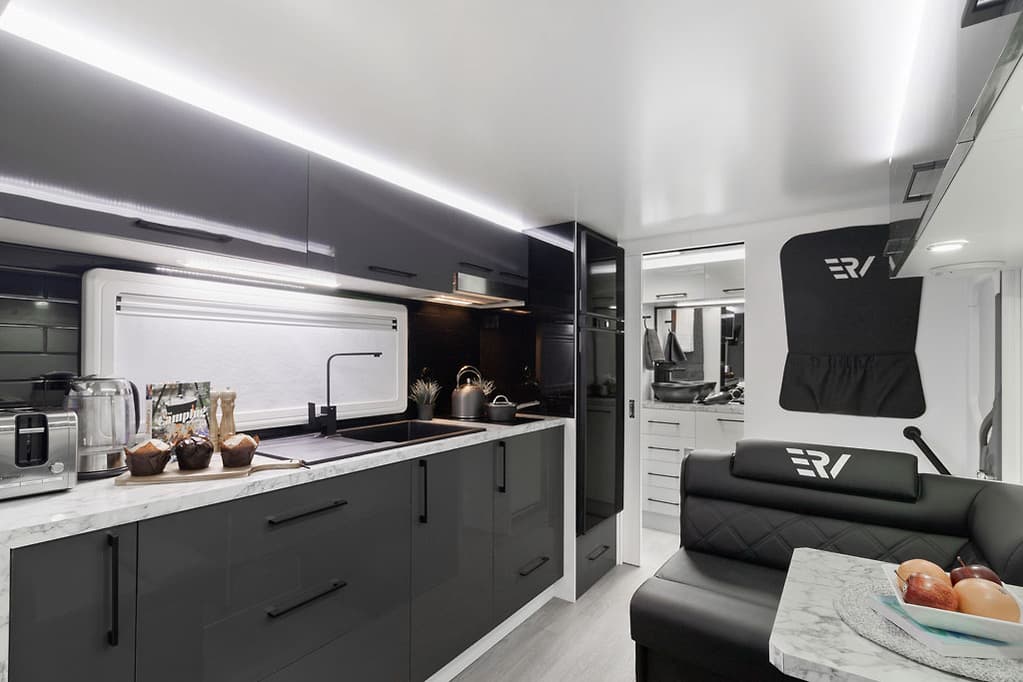 The ERV range will be available from March next year in a range of layouts and five body sizes, from 18ft 6in to 22ft 6in.

Prices start from $109,900 and all ERV vans come with a five-year warranty. The ERV2 as displayed at the show was $119,900 with the off-road suspension and the larger 2033-Watt solar panel array from the top-spec ERV5 model.

The ERV by Retreat is the first to leverage power technology from OzXCorp. However, buyers will have to wait a bit longer before getting hold of a production version of the Hybrid Drive system that uses electric hub motors to power the van wheels, also developed by OzXCorp.

Drak said ERV would conduct testing when the technology was made available from OzXCorp.

“No release date has been given by OzXCorp so we are unable to comment on a planned or proposed launch of the system by ERV,” he said.